The new architect designed Vincent Fire station is a standout construction in the heart of suburban Perth featuring an eye-catching fiery exterior that houses state-of-the-art facilities.
The $19 million structure provides emergency services to Perth’s CBD and surrounds and was built as a response to the city’s flourishing population.
Beautiful lines and simple shapes make the building’s street facing façade a dramatic feature that captures the gaze of onlookers.
This unique finish was achieved by utilising Bisschops Panel cladding with James Hardie ExoTec™ façade panel and fixing system as its substrate.
The build commenced in January of 2017 and with the fire station being an integral part of the Perth community the turnaround time for construction was very tight. Several key requirements needed to be met with the material used for the building’s exterior including its capacity to withstand exposure to elements in a public space, ease of installation and maintenance, while achieving a high quality appearance.
Express jointed cladding system Bisschops Panel with James Hardie ExoTec™ façade panel and fixing systemsubstrate was selected by the architect as it offered a solution that met all their needs.
“Pre-finished Bischopps Panel was approved due to its many benefits including its 15 year warranty, easy cleaning, graffiti resistance and ease of installation utilising the James Hardie D3 1000 Fixing System,” says Michael West of Oldfield Knott Architects

Having a high quality, easy to install product often comes at the cost of style but Commarc Industries say design principles were not compromised with the adoption of ExoTec™ façade panel and fixing system as panels come in a variety of sizes and thicknesses and can be custom cut for optimal visual impact, creating a clean stylish finish which is resilient to the harshest of climates.

Michael continues, “Utilising a prefinished product such as Bisschops Panel allowed for a clean uniformed finish.”

“The quality of coating is clearly represented in the images seen and noted by the client at the completion of the project,” concludes Michael. James Hardie® fibre cement products are fire resistant, and suitable for use in applications where non-combustible materials are required in accordance with Deemed-to-Satisfy Provisions C1.9 (e) of the NCC, Building Code of Australia Volume One Amendment 1. A Natural Extension of the Landscape 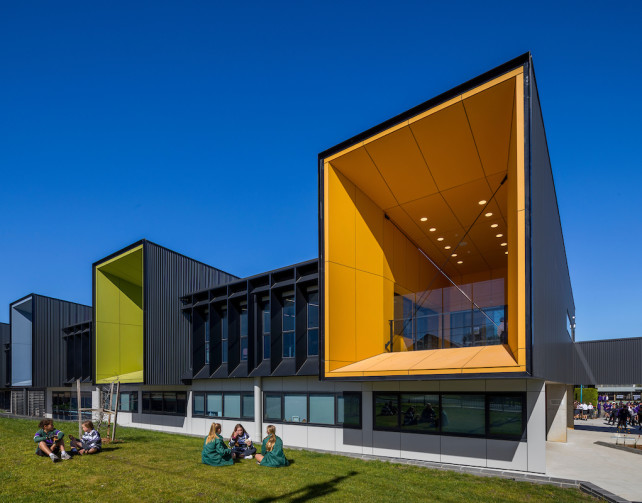 Maintaining a high standard of finish